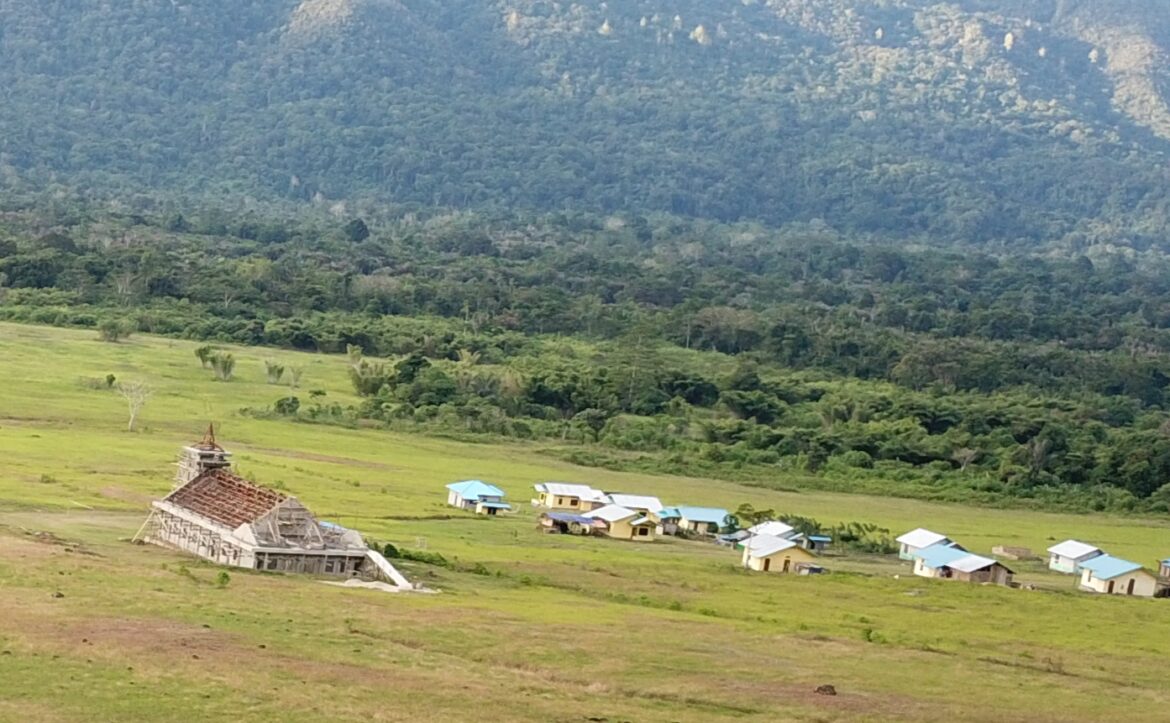 Bangun Bumi Papua is the name of the Food Estate project promoted and managed by PT Alamindo Lestari Sejahtera Tbk (ALS) for the development of agriculture, plantation, livestock, fisheries and tourism businesses, which are planned to be located in the PT ALS forest concession area in West Papua Province.

The Bangun Bumi Papua proposal plans to develop an integrated livestock industry starting in 2022, namely the development of beef cattle breeding and fattening businesses, and the development of corn, grass, and straw plants for the procurement of animal feed.  It takes about 120,000 hectares of land for an integrated livestock industry.  The ALS Manager Team has met the Vice President’s Special Staff. 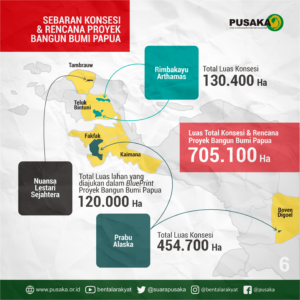 The project’s entire concession reaches 705,100 ha, an area larger than the U.S. state of Delaware

or 120,000 ha larger than the entire Indonesian province of Bali.

The integrated livestock industry project is managed by PT Nuansa Lestari Sejahtera, a livestock and agricultural cultivation company, which is currently cultivating land in Bomberay District, Fakfak Regency and in Kebar District, Tambrauw Regency.  It is hoped that in 2036, this livestock industry will make West Papua Province the first province in Indonesia as a national cattle barn towards the realization of beef self-sufficiency.

The Forest and Land Degradation threat in Conservation District

In January 2021, investors and directors of PT ALS held an audience with the Staff of the Vice President, Yulian Hadromo, Sukriansyah and Lukman Hakim, presenting the Blue Print for Bangun Bumi Papua for a food estate.  The support and response of the Vice President’s Staff is not yet clear.  The ALS company is continuing its efforts to meet the Governor of West Papua, Dominggus Mandacan and Kadishut, (Kepala Dinas Kehutanan), the Head of Forestry Department FH Rubaweri, in February 2021.

In January 2022, the company PT Nuansa Lestari Sejahtera (NLS) met with the Regent of Tambrauw, presenting a plan to develop an integrated livestock industry.  The government of Tambrauw and PT NLS invited community leaders in Lembah Kebar for a meeting to socialize the company’s plan for the development of cattle and feed crops in Kebar District, Tembrauw Regency, in March 2022.

Requirements for business permits have not yet been issued. The Indigenous peoples of the affected Kebar and Sinopi valleys are split between opposition and support for the company’s plans.  On May 19, 2022, youth, university students and students from the Tambrauw area staged a protest against the company operating in Kebar which was delivered via YouTube.  The youth and students’ actions asked the district government not to become a facilitator for the company and not to give permission to the company, arguing that Tambrauw Regency is a conservation area that should be managed sustainably.

In 2011, Tambrauw Regency was designated as a Conservation Regency with an area of ​​11,529.18 Km2.  About 75% of the Tambrauw area is used as a conservation and protected area.  The results of the Tambrauw Expedition (LIPI, 2019) revealed that the forest condition in Tambrauw is in a climax phase which is a characteristic of primary forests which are rich in flora and fauna biodiversity, with unique ecosystem types.  One of them is the grassland and forest ecosystem in the Kebar Valley, where endemic bees live.  This group of bees acts as a pest control agent.

However, currently, forest and grassland areas in Tambrauw Regency are facing threats due to policies and the issuance of business permits for logging, large-scale plantations, livestock and mining industries, as well as infrastructure development, which is carried out by ignoring the principles of sustainable development, justice and respect for  indigenous peoples’ rights.  This in turn will lead to potential disasters and environmental damage, socio-economic problems, which will greatly affect people’s lives and the environment, as well as the surrounding area.

This large-scale development and investment project will increase the extinction of flora and fauna.  Some flora and fauna in Tambrauw have a high level of extinction threat on the ICUN Red List, namely the Dipterocarp plant species, namely Hopea Gregoria, and the irian hedgehog mammal (nokdiak naroten), the mambruk bird (goura cristata) and epimachus fastosus.

The President of the Republic of Indonesia, Joko Widodo (2022), said that the government will continue to improve natural resource management so that there is equity, transparency and fairness.  He also said that Indonesia is open to credible investors, who have a good track record and reputation, and are committed to contributing to the welfare of the people and preserving nature.

The implementation of the President’s commitment is still far from being realized. The food estate project ‘Bangun Bumi Papua’ in the development of an integrated livestock industry involving companies such as PT Alamindo Lestari Sejahtera and PT Nuansa Lestari Sejahtera, which still cannot be called credible investors, who can prosper the people, be fair and preserve the nature.  The financier companies involved in the integrated livestock industry are suspected of having a bad history of legal problems and conflicts of interest.

Based on the data from the Directorate General of AHU, Ministry of Law and Human Rights (2022) it is known that PT Nuansa Lestari Sejahtera (NLS) shares are owned by (1) PT Artha Tera Niaga (15 percent);  (2) PT Puma Berkatindo (10 %), and (3) Juan Mulya (75 %).  The dominant shareholder, Juan Mulya, is a partner of Kim Johanes Mulia, the dominant shareholder of PT Alamindo Lestari Sejahtera through PT Intra Alamindo Investama.  Kim Johanes Mulia has several times stumbled into legal problems in financial scandals.

The company PT Inara Investama Internusa is owned by Andri Boenjamin (Director) and Rudy Samuel, and the company PT Mitrausaha Suma Perdana, owned by Sumadi Seng (Director) and Eddy (Commissioner).  It is known that Andri Boenjamin, as Director of PT Kencana Investindo Nugraha, was once investigated by the KPK regarding the permit case for the Tering Bay sea reclamation for the development of the Batam Marina Bay mega project, Riau Islands Province.  Andri Boenjamin is the younger brother of Karli Boenjamin, a palm oil entrepreneur and the deputy chairman of the Nasdem Party High Council.

The controversial investor, Sumadi Seng, became the shareholder of PT NLS through PT Inara Investama Internusa.  Sumadi is known as a port business ruler and is involved in corruption crimes, being a liaison for customs and excise officials, law enforcement and Senayan politicians (TEMPO, 2014).  Sumadi Seng also serves as the President Commissioner of the company PT Inti Bios Persada Sejahtera, which was founded by Enggartiasto Lukita for the clinic business and PCR swab laboratory.

Indonesia CSOs Joint Statement on the EU Due Diligence Regulation

The Logical Fallacy of “Unproductive” Forest

PRESS RELEASE: Protect the Indigenous Women who are...