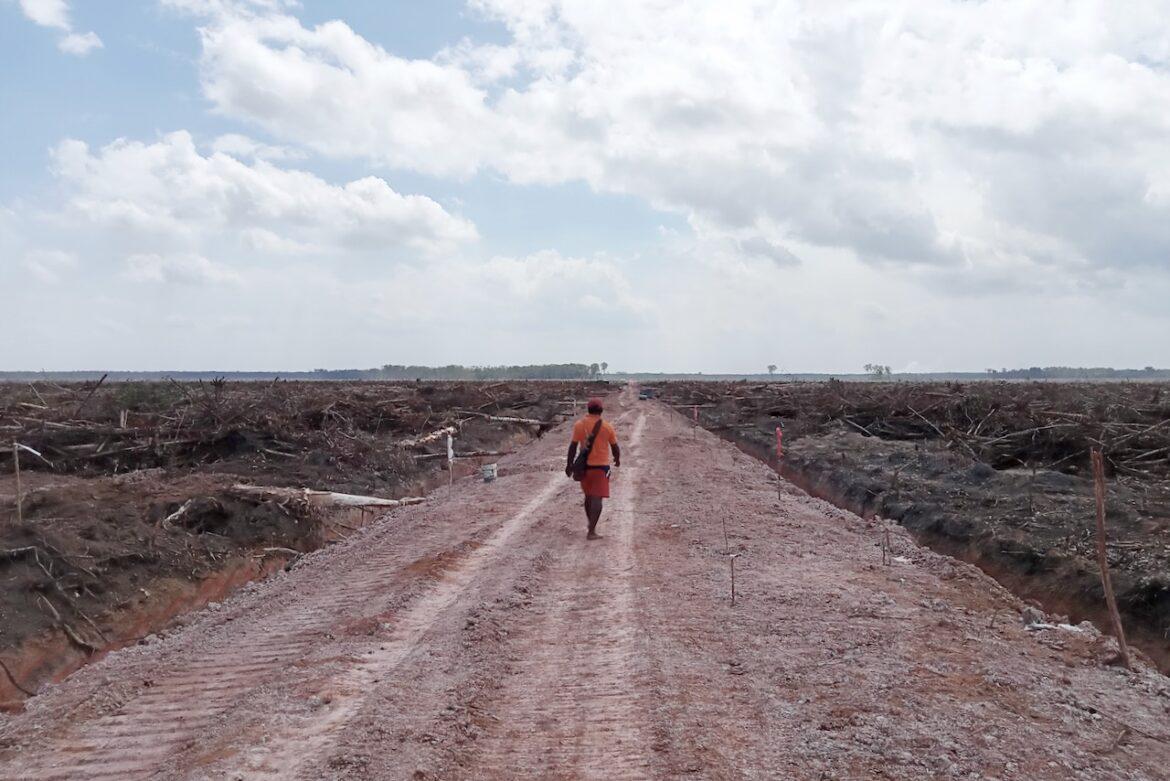 Merauke, Papua, Indonesia (15 March,a  2022) —A new investigation released today by Environmental Paper Network (EPN), Mighty Earth, Pusaka, Solutions for Our Climate (SFOC), Korean Federation for Environmental Movement (KFEM) and Advocates for Public Interest Law (APIL) details the devastation of pristine forests in the remote province of Papua land, Indonesia. Essentially, this paradise for biodiversity, Indigenous culture, and carbon capture is being devastated to produce wood chips for papermaking that are being branded as sustainably and ethically sourced products to consumers across the globe.

Moorim Paper, a South Korean company, through its subsidiary company, PT Plasma Nutfah Marind Papua (PT PNMP) has cleared more than six thousand hectares of forests between 2015 and 2021. With 64,000 hectares of area they manage, more forests will be at risk to be chopped down in the coming years.

Among the demands resulting from the investigation, the coalition is calling upon Moorim to publicly commit to an immediate moratorium to further clearing, pending a thorough analysis for the environmental and social values to be protected; the adoption and implementation of a No Deforestation No Peat No Exploitation (NDPE) policy, including a High Conservation Value – High Carbon Stock Assessment (HCV-HCSA); and the restoration of the area that it has already deforested, including remediate the Indigenous clan rights that have been ignored. Additionally, the coalition urges the Forest Stewardship Council (FSC) to launch a full investigation of this matter in order to maintain the integrity of the FSC certification.

The Papua rainforests are an authentic biodiversity paradise, home to thousands of unique flora and fauna species of the earth, especially in the area that the company is located is the habitat of tree kangaroos and cassowaries, with many species still to be discovered and catalogued, and others categorised as threatened species by the IUCN Red List.

Until recently, the pristine forests in the remote province of Indonesia, remained relatively intact. Now, however, a wave of industrial plantations is carving up pockets of the region, clearing entire ecosystems as well as Indigenous Peoples’ lands to produce commodities for the global market.

“Paper is sold globally as an eco-friendly plastic substitute, yet it is still coming from deforestation and abuse of indigenous peoples’ rights”, said Sergio Baffoni of Environmental Paper Network (EPN). “We cannot sacrifice the last paradises of the planet for products that end up in the trash bin within a few hours after their first use”.

“Moorim Paper advertises to be the  leader of the sustainable pulp and paper industry, but its violations of human rights and the destruction of tropical forests in the pristine island of Papua are not known by the Korean public.” said Soojin Kim of Solution for Our Climate (SFOC). “It is unacceptable that Moorim has ignored this warning of Korean CSOs and continued with business as usual without resolving these issues in the last three years.”

The forests felled by Moorim in Papua belong to the traditional clans, whose rainforest shape their life and culture. Yet, the company’s bulldozers destroyed their fishing ponds, their hunting areas, their sago hamlets and even their sacred sites, where the traditional clan lands harbour their social and spiritual values. Moorim has failed to respect the rights of indigenous communities and to implement Free, Prior and Informed Consent (FPIC) to any activities in their lands.

“The company’s failure  to respect the rights of indigenous peoples causes socio-economic, cultural and environmental losses” said Franky Samperante, The Executive Director of Yayasan Pusaka Bentala Rakyat. “Indigenous peoples are already facing difficulties in meeting their needs for quality food and water, livelihood , harmony, in which all of these cannot be replaced with unjust compensation. The government must provide sanctions for alleged violations of the company”.

Furthermore, “This report shows how a company like Moorim has continued to trash the last rainforests in Indonesia whilst hiding behind the FSC green forestry label. The FSC must take swift action against any such company that violates its standards  otherwise the FSC label is just greenwash” said  Annisa Rahmawati, Mighty Earth Advocate for Indonesia campaigns.

“The Korean government is directly linked to the environmental impacts and human rights violations caused by PT PNMP by providing a 9.1 billion KRW loan to PT PNMP’s mother company, Moorim P&P for its oversea forestry operations. The government should immediately open a transparent and inclusive investigation about the harms caused by PT PNMP as well as require Moorim P&P to conduct the environmental and human rights due diligence on PT PNMP’s business including providing remedies” said Shin Young Chung of Advocates for Public Interest Law (APIL).

Time is running out to save our climate and the last frontier forests of the earth as well as the people whose lives depend on it. It’s time to redouble our efforts to break the link between commodity production and the destruction of habitats and treasured places on our planet.

It is time for Moorim to stop hiding under eco-friendly claims. Should  Moorim fail to take the necessary steps, its buyers, financiers, and business partners close supply contracts, divest, and suspend financial and services agreements.

The report is available at: